The International District encompasses approximately 3.9 square-miles and is one of the most ethnically diverse areas in Albuquerque. A population boom following World War II and subsequent decades of economic struggles have transformed the neighborhood from what was a sparsely population area with a few homesteads into the neighborhood with the highest population density in the state.

For this project, the boundaries encompassing the project sites and stakeholders has been expanded to include an Implementation Focus Area and a larger Resource Area. While some of the priority project sites from the ID Urban Agriculture Plan are not geographically located strictly within the boundary of the International District (as defined by the Healthy Here), the sites serve a population tied to communities who identify with the International District. Because many of the resources related to urban agriculture are sociocultural, it is important to consider the fluidity of boundaries and how we all may identify and connect with different, often multiple communities over the course of a lifetime. 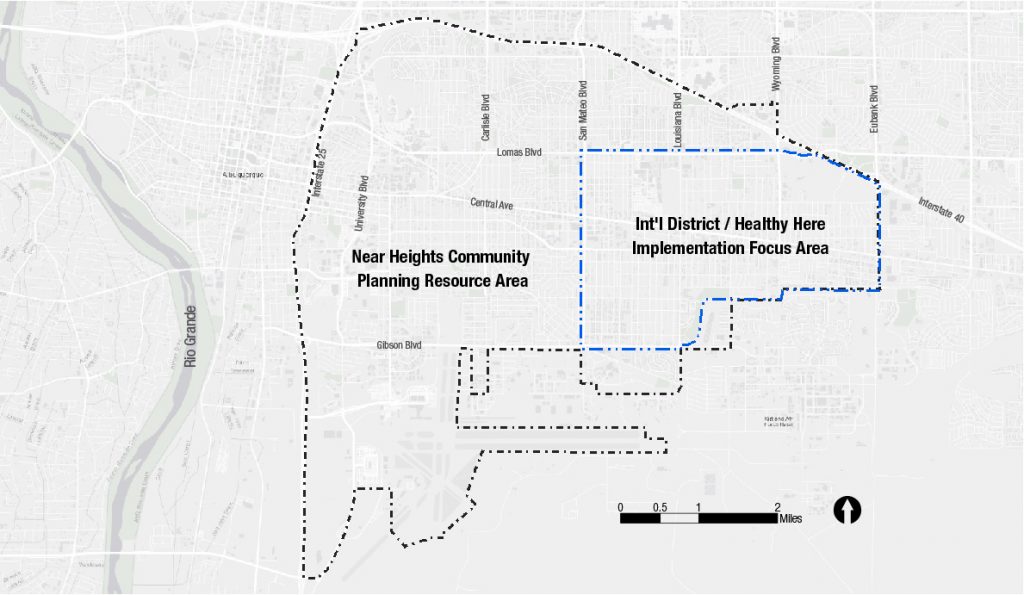 The International District Urban Agricultural Plan Implementation Focus Area encompasses approximately 5.2 square miles and is bounded by Lomas Boulevard, San Mateo Boulevard, Gibson Boulevard/Kirtland Air Force Base and Eubank Boulevard. The Implementation Focus area includes the Fair West, La Mesa, Trumbull Village, Elder Homestead, South San Pedro and Siesta Hills neighborhoods and includes a majority of the plan project sites. In 2016, the estimated total population of this area was approximately 34,873 residents among 14,181 households. Median household incomes in the International District was lower than the City at an estimated $26,201 per year (vs $49,878 for the City of Albuquerque). The total estimated jobs in the area were 10,587, showing there is a slight jobs/housing imbalance in the International District.